Bns league season 5 has started the playoffs, and this playoff season we will do the best of 3 matches to determine which team moves on to the next round. The matches will follow the same rules as the regular season put with an additional 15 minutes of sudden death overtime, for more information about the Bns season 5 playoffs click here

Coco has organized a 3v3 league. All the teams slots have been filled. The rules are slightly different than the 5v5 league, they are set up to favor more wins and less ties. You can find admins that has @ front of their name in #3v3.League for more information click here 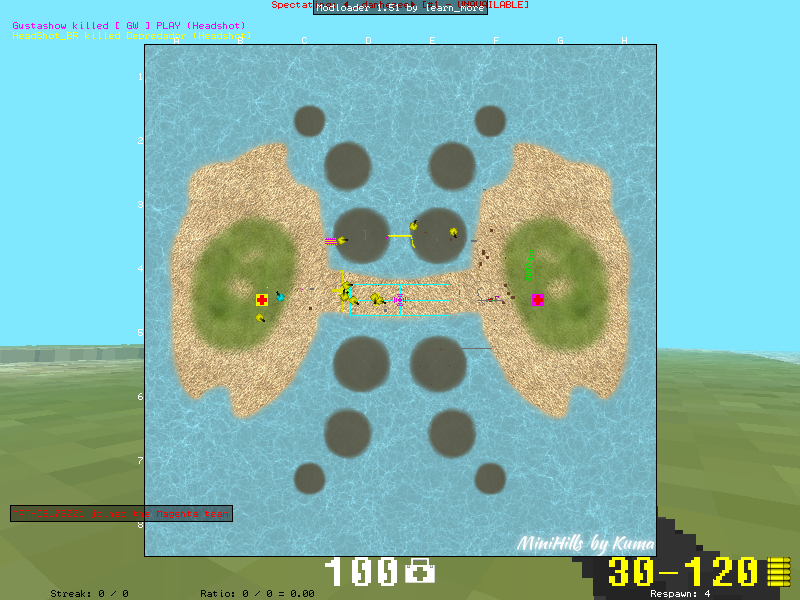 BR's Patchloader fixes bugs in 0.75 and has other features like the babel platform hidden on the minimap, k/d ratio and streaks permanently displayed at the bottom, you can zoom in twice when you shoot. When you press tab you can know how high the babel tower is in any babel map. He isnt quite ready to release it to the public yet as there will be new features and updates. BR is an IRC kind of guy and he will most likely be keeping us updated at #BuildandShoot.

Edit: BR released an FPS increaser http://www.buildandshoot.com/viewtopic.php?f=13&t=11995. If you play at a low resolution and get a horrible framerate try it out.

VoxelShop
VoxelShop is a free qubicle like tool that recently added kv6 file support. It has a more user friendly design then slab6 as well as more tools. It is completely free but it does require java to work. It also has support for 3D printing so you could make 3d deuce models like we have seen before or even a whole map if you have qubicle and a powerful enough printer! 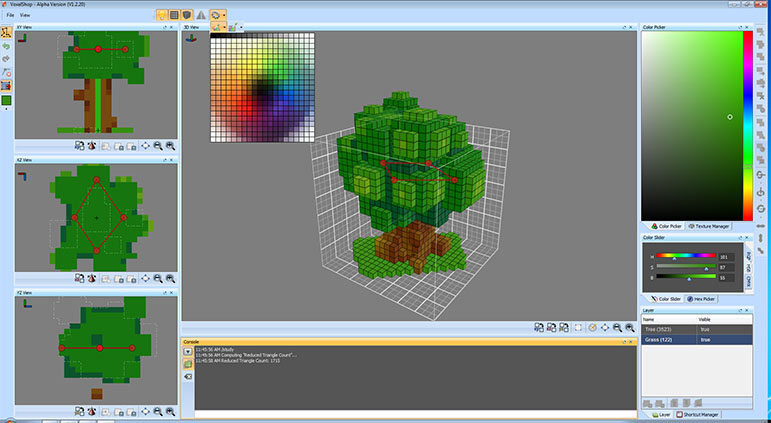 Desert Bluffs is a babel map made up of small rocks. The design of the rocks are mostly random allowing for some cat and mouse gameplay. The height of the map is also something special. The height is around 15 blocks so the babel towers need to be around 45-50 blocks . This will cause the matches to be longer then a smaller map like Tunnel-Top. Overall it is a great babel map similar to holes. Good job Lincent!

Yubacore is Lostmotel's first babel map with the terrain created entirely in gimp. It looks like a mix between 'road island' and 'ice craft'. The map is extremely details and looks just beautiful! There is cover all over the place too so players can get right to tower building. The map also looks very realistic with the placement of the mill, the extending of the power lines to loop at each side of the map, and the small bamboo fields by each spawn. Great job Lostmotel!

LINESPQR needs a new signature and they are willing to buy you a game if you make the best one. Click here for more information.

So, that's not a hack? Being able to zoom in farther than a normal client?
Top

Mr.Torch wrote:So, that's not a hack? Being able to zoom in farther than a normal client?

OpenSpades zooms farther than voxlap, and tspd can zoom father than that.

From what I've seen while playing with it, it helps at really long range, but since it doesn't change the spread or recoil, you'll still miss and you will have a much harder time controlling recoil. Also, you get snuck up on REALLY easily if you aren't careful - you can't see anything close to you unless it's right in front of you.

Server owners will be able to disable it (and all other features) with a script, if they so choose.

Quote
That's awesome BR! By the way, can the zoome be specific to a screen area? Like, I want to make an actual telescopic sight, only the sight is zoomed but anything else is not? Just asking, this must be a really hard task :D

MrHaaax wrote:That's awesome BR! By the way, can the zoome be specific to a screen area? Like, I want to make an actual telescopic sight, only the sight is zoomed but anything else is not? Just asking, this must be a really hard task :D Quote
My life is complete, thanks BR_

Quote
Yubacore? u love this map already i will flank with rifle

Is not Hacking its skills,legitamently

onigiri
3 Years of Ace of Spades

Quote
Shame there isn't a modloader for OS. Would use if I used the Classic Client. :)

Admins, any news on the Modding Competition? Otherwise I will just release the gun.

So, that's not a hack? Being able to zoom in farther than a normal client?

no, BR said izzy allowed it and since I have the BR's modloader alpha version in my aos when I zoomed in twice the recoil doubled and the sensitivity was the opposite it felt like the sensitivity switched down 4 to 2 it was unbelievable but zooming in twice was helpful when I tried to fog shot someone when they can't even see me through the fog especially in 1 v 1.
]

Quote
The zoom does have enough drawbacks to compensate for its op-ness, thus, I believe it's completely legal.

Anyways, BR, you did a fantastic job on this PatchLoader thing.
Any ETA on a full release? I'd be happy to test it out and break it as much as I can.
IGN: ForTheHype

GamingFTW
3 Years of Ace of Spades

Quote
Really interesting CAD software. I'll have to play with it later.

Also hi to anybody that still remembers me......

Quote
GJ BR_! When will you release this patchloader? And where can I keep track?

Quote
Thanks for the interest! It makes me feel good about working on it :)
No ETA yet on patchloader, but you'll hear about it when it's done for sure. Maybe a month? I'm not sure.
If you want to know how it's going ask me on IRC sometime. I'm not the kind of guy who writes dev blogs or whatever, especially in the earlier stages of a project. Right now I've got an almost fully reverse engineered client, a few sample patches to test with, and a general structure, I think my next goal is fixing my hooking code (the part that interfaces with the client). I've also got to make a menu, make settings stick around longer than one run, make an installer, an updater, and a pysnip script to disable features. The last thing I'm going to do is get all of the patches I currently have working under the new system.
Top
Post Reply
21 posts Page 1 of 2
Return to “Official News”