some random scripts (which work half-assedly)

Incomplete code that isn't ready for use.
5 posts Page 1 of 1
Post Reply

some random scripts (which work half-assedly)

Quote
this will be quite messy and long now

since the homo servers have been taken down i decided to release some of the scripts we used over there as well as experiments of mine which i believe to be funny/useful/interesting up to a certain degree,
however most of them work with several issues which kept me from releasing/finishing them
i will explain here what each of the scripts are supposed to do and what their problems are
there are even some scripts which work completely fine but some of them might not even function at all anymore
note that i will most likely ignore any kinds of suggestions/ideas on how to fix certain things or improve them since im kinda too occupied studying for my finals
(in other words: i will be too lazy to do that anyways so dont expect me to fix anything)
im simply posting it here as a form of idea/request for anyone else to pick up,
i dont even know whether it belongs in this section of the forum or not

--------------------------
trollscriptplus
originaly an script by me and leif_the_head
this can be considered as badmin toy to screw around with players
i wrote it to annoy hackers since baning them is no fun at all and the life of an admin can be quite boring
it features many commands:
/burn <name> [damage] [duration] : damages a player over a set amount of time
- may crash the server if you enter way too high values

/launch <name> height : launches a player in the air --- not working anymore

/hold <name> [time] [height] : holds a player up in the air rendering him immobile for a set amount of time, expect the target to ask what is going on
- will also crash the serv if you hold a billion players up for a trillion years

/troll <name> : launches a player 40000 blocks up (dont ask me why), this will be a flight of roughly 15 minutes
-migh crash voxlap clients if you are lucky

/getout <name> [x, y, z] : moves your target out of the map leading to a crash of voxlap clients
- will cause an error, but still work

/flash <name> [seconds] : will give the player a seizure
- the skies color wont revert back after that

/repeldamage <name> : the player will receive the damage he deals ,
it took a hacker once 53 self-kills to realize it (but yeah what else do you expect from a 12 years old)

/confuse <name> [time] : teleports the target randomly across the map

/noammo <name> : removes the players ammo everytime he makes a move, i think this is a fair deal for aimboters

/spam <name> <repititions> <interval> <message you want to tell him several times> : i guess this is self-explainatory

/leave <name> : it appears for the target like everyone else left the server, they turn invisible for him
-irreversible

/nirvana <name> : your client will think it disconnected from the server, this will just mess you up so hard that you have to reconnect

/nag <name> <time> : tries to box in the target, the blocks are only visible to him so it can be quite amusing to see him dancing around like mad

/prison <name> : locks the player up in the prison (the pink cube the script creates in the centre of the map), the player is rendered useless that way, there was once a script like that before but i never found it so i just wrote something like that on my own

/buildprison : in case the prison has been destroyed it will be rebuilt
-it will be only visible after reconnecting though

/namechange <name> <new name> : changes the players name
- it will be only visible for those who connect after that

/msessagechange <name> <new message> : whenever the target is writing something it will be changed to whatever you specify

/cocaine <name> : the player will teleport to the place he is looking at everytime he moves his mouse
-it will likely teleport him outa the map which will either crash him, of if he has the intel the entire server while he is at it


messagecolor
this script will make your global chat appear colored (according to your teams color) and turn the teamchat colors to white
this could be useful on snowy maps
-the irc bot will display team chat messages twice for a reason i will never understand
-it will also err whenever someone uses characters such as '?' or '!' , idk the right word for them
--------------------------


itsnadingmen
grenades will still damage players even though they explode inside water, especialy recommendable on pinpoint servers
/togglewetnades toggles this feature
-somehow i get the feeling i calculated something wrong here, sometimes grenades seem to ignore ones cover
--------------------------


texture
this one will change the upper block-layer of blocks to not make it appear monochrome (cant think of any better way to express myself right now, instead have a pic to know what i mean) 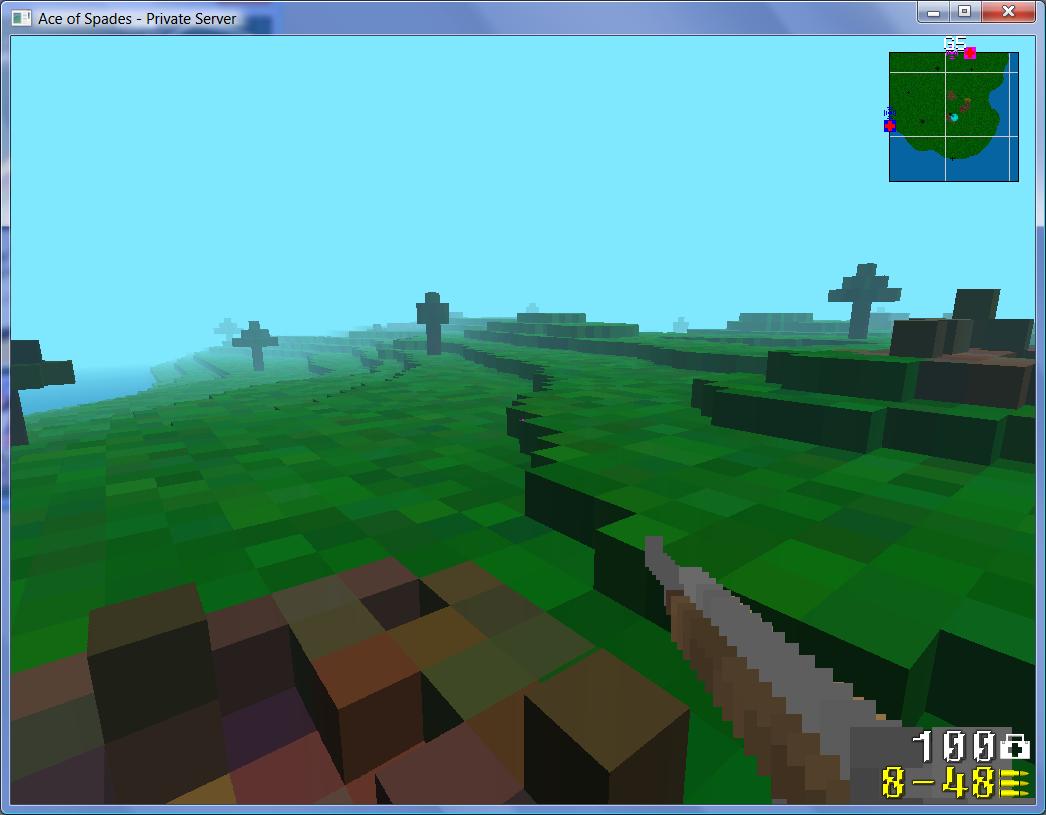 this was mostly ripped from a script a_girl was writing to add a little texture to the water tiles so i guess full credit should be given to him
this script might be usefull for mapmakers
-it doesnt cover the entire map, if someone wants me to change that he may message me on irc
--------------------------


blackman
this script removes all watertiles, thus turning everyone who steps onto these removed tiles into shadows
it looks quite beautiful on openspades though with the right settings since it will make the entire map float
(cant provide any pics there since it doesnt work on new OS versions anymore it seems)
-it has a high probability to crash clients though
--------------------------

Dr.Morphman wrote:it took a hacker once 53 self-kills to realize it (but yeah what else do you expect from a 12 years old)

Bbig Boss wrote:how do i quit the prison, or , at least, move it? the place in which appears on my map is very annoying

open the script with an editor, and look for these lines

Code: Select all
change the coords however you like (just keep in mind that a z-value of 63 is the ground)
Top

Bbig Boss wrote:how do i quit the prison, or , at least, move it? the place in which appears on my map is very annoying

open the script with an editor, and look for these lines

Code: Select all
change the coords however you like (just keep in mind that a z-value of 63 is the ground)