Why don't we all just STOP doing this BS? READ IT!

Quote
This has been going on for a very long time. I doubt it'll actually end any time soon.
Top

Quote
I agree. This was only my plea or attempt to try and show SOME people that this was not the right way. I'm glad to see that you (shaz) see the error here. I doubt any change will come, they will stay the way they are and one day this community will die because of them, and the people like them that came before.

Quote
Yea that thread is useless besides kiwi posting his score. None of the posts are constructive. The OP doesnt walk away after reading the first few post knowing anything more than he did before. Even if I yield you the argument about not creating score threads does the OP know that is the goal of the post afterwards. Saying "no one cares about your score" and then quoting it 3 times doesnt provide constructive feedback. And for the record someone playing the game sharing an ingame experience is not a bad thing. I would think in game experiences in OpenSpades belong in OpenSpades general discussion, same for AoS Classic.

Quote
Thank you for that enlightening read SWay. Although I try my best to not try and mock newcomers, i'll keep this in mind the next time I talk to them and make sure my tone isn't hostile or aggressive. It's always good to see people helping newcomers out and it's always good to see interesting opinions like these.
Also Hi scarecrow, how are you man. Long time no see, i'll pm ya.

Quote
Why do people not seem to know that people simply post that they don't care, because they're actually trying to help the OP? Why don't you think it like that way? That is their feedback, so the OP can act on it and not make any other threads similar to that in the future, or to anyone else in that matter. What you really must understand is that these people are not trying to shame the OP, which for some reason you think they are. If people really leave over just a few negative posts, then they deserve it as they cannot follow advice from other, more experienced people. They should not just say "Waaaahhh, everyone hates me, I hate BnS!". They should say "Well according to people's feedback, my thread was quite pointless, and I should take their advice and refrain from making any threads similar to this one" or something along those lines. Do not be ignorant, if someone tells you that something is wrong, then you must act on it. And I would think that the OP would know what to do with all the feedback he is receiving.
insert witty quote here like the cool kids do
Top

Quote
Or maybe people should just not act rude in the first place. Usually if I come across a thread I don't care about, I just ignore it and move on.
Come chat with the last good clan left! i.r0t.co #RoT
Videos | Logs | Logs censored by Pastebin
I'm better than you. 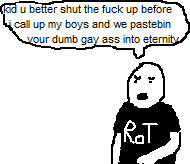 SWayKills wrote:I agree. This was only my plea or attempt to try and show SOME people that this was not the right way. I'm glad to see that you (shaz) see the error here. I doubt any change will come, they will stay the way they are and one day this community will die because of them, and the people like them that came before.


This is my plea to you: Try to ignore the kids being cute and post and reply in the manner you would like to see conversations develop on the site. The kids being cute are never going to go away, they are young and in their minds 100% correct on all subjects.

Quote
I try my best to remember this. BUT, then I think about the damage they are doing to the game and community, and it just kills me. Its just a game. But it is THE game that helped me meet most of the people I consider true friends. And "cute" comments are killing it.
Top

SWayKills wrote:I try my best to remember this. BUT, then I think about the damage they are doing to the game and community, and it just kills me. Its just a game. But it is THE game that helped me meet most of the people I consider true friends. And "cute" comments are killing it.

Yeah, the OP explains the community in a nutshell. To be honest, it is sort of expected of people on these forums to be so condescending. Hell, look at my first couple posts, and look at the kinds of posts I make now. I still post like that in some place, still talk funny and whatnot, but you just can't do it here without being a retard, or stupid. The community itself is a huge ass problem in why AoS is declining, and sadly I don't think that's going to change unless everyone makes a self effort to change it themselves...

If you want to laugh your ass of at Jdrew Irony, open this.
Spoiler:
http://i.imgur.com/YObbyUr.png
Top

Did you read the entire thread or are about to say something the good people of this thread had already iterated?

If so, here's what you only need to know:

*Be nice to noobs and help them learn the game.
*Don't be an asshole.
Project Vanilla: Spreading the word of the Internet Box since '13

SovietMarmalade
3 Years of Ace of Spades

Quote
This post made me cry tears of joy

Come on and SLAM and welcome to the JAM!
Are you a real human being? Test it here.
Top

SWayKills wrote:LOOK AT MY SCORE- "No one cares"
CAN SOMEONE HELP ME- "Learn how to read"
I'M CONFUSED- "Are you retarded?"

Are you all serious with this BS? This game, in both AoS and OS forms, are dying! I remember playing in 2012 when we had over 1000 players in non peaks times. I remember when the people here would answer a question even if it had been answered a million times before (or at least just give a link to the answer instead of being an asshole). Now we often, even in peak times, have 400 players.

Why can't SOME of you get your heads out of your asses and see that being a dick to people who are new is no way to keep this game alive? I have spent the last year e-mailing youtubers and "popular" internet sites to talk about and share our game. And the second we get a new player, half of you start being instant assholes to those people.

If you want this game to live, how about you just try being helpful to new people, no matter how stupid they may be, instead of being a total arrogant prick? OH, you know everything about AoS, OS, scripting and the internet? Good for you. How about you try to remember that AoS was once SPECIFICALLY designed for those who had poor PCs or didn't know shit about computer gaming. When we started out, this community was full of 11-14 year olds, but it grew (I am 27 now).

So how about the next time someone new asks a question in the forum, you just answer the damn question instead of making them feel like shit, which forces them to leave the community forever. I want this game to live just as much, if not more than, anyone else. So lets be accepting of new people. Lets be helpful. Lets be nice. And stop being total fucking pricks!

EDIT- This is a new account because I wanted a new name and to be far from my prior clan, my number of posts or my join date mean nothing. I have been here nearly as long as anyone who is still here from the beginning.

Fair points. Admittedly, I have had a go at a few forum members, although these would be known shit-posters and/or retards. I wouldn't criticise somebody new(or old for that matter) that may require help with something or other.

Quote
Can't believe someone made a smart thread on BnS for once. I completely, wholeheartedly, 100% agree with the OP. This type of behavior has been going on for so long that it's almost absurd, and some people are crazy when it comes to it. This forum is useless if you need help, because if you make a thread asking for help, someone will make a post saying "USE SEARCH YOU RETARD" or make fun of that user because he doesn't know this or that. The Iceball thread (and the game itself - anyone remember the help text in Iceball?) is a beautiful (in a bad way) example of how cynical and unfriendly people here are.

I've no idea how this can be prevented (except for banning people that act like this) but it's turning into something that scares off new users.

As for the OP, if I could give you a million thumbs up or likes, I'd do so in a heartbeat. Great post.
Top

it was not meant to be constructive or even criticism. please tell me why anyone would care about someone else's score? maybe if it was breaking any records, which i believe it wasn't.

now the main post, i agree with, but there's a difference between people looking for help and getting someone else to do it for them.
if someone was looking for help, they would've (or should've) googled about it beforehand, and then when it came back without any results, you'd ask people.

and i'm sorry for any trouble i may have caused to newcomers.
but there's still a difference between newcomers and idiots that decided to make an account to not post anything worthwhile.
<podbiel> zeka did nothing wrong

Users browsing this forum: No registered users and 5 guests