How To: Create Custom Heightmaps in GIMP

How To: Create Custom Heightmaps in GIMP

IF YOU HAVEN'T READ IT FIRST, I SUGGEST YOU DO.

Alright, so in the last tutorial, I walked you through a process of creating colourmaps in GIMP. As I mentioned at the start of it, heightmaps are much more important than colourmaps - heightmaps dictate the gameplay and this is mainly where maps are made or broken.

Before we begin, there are a few things to note; Alright, let's get started; 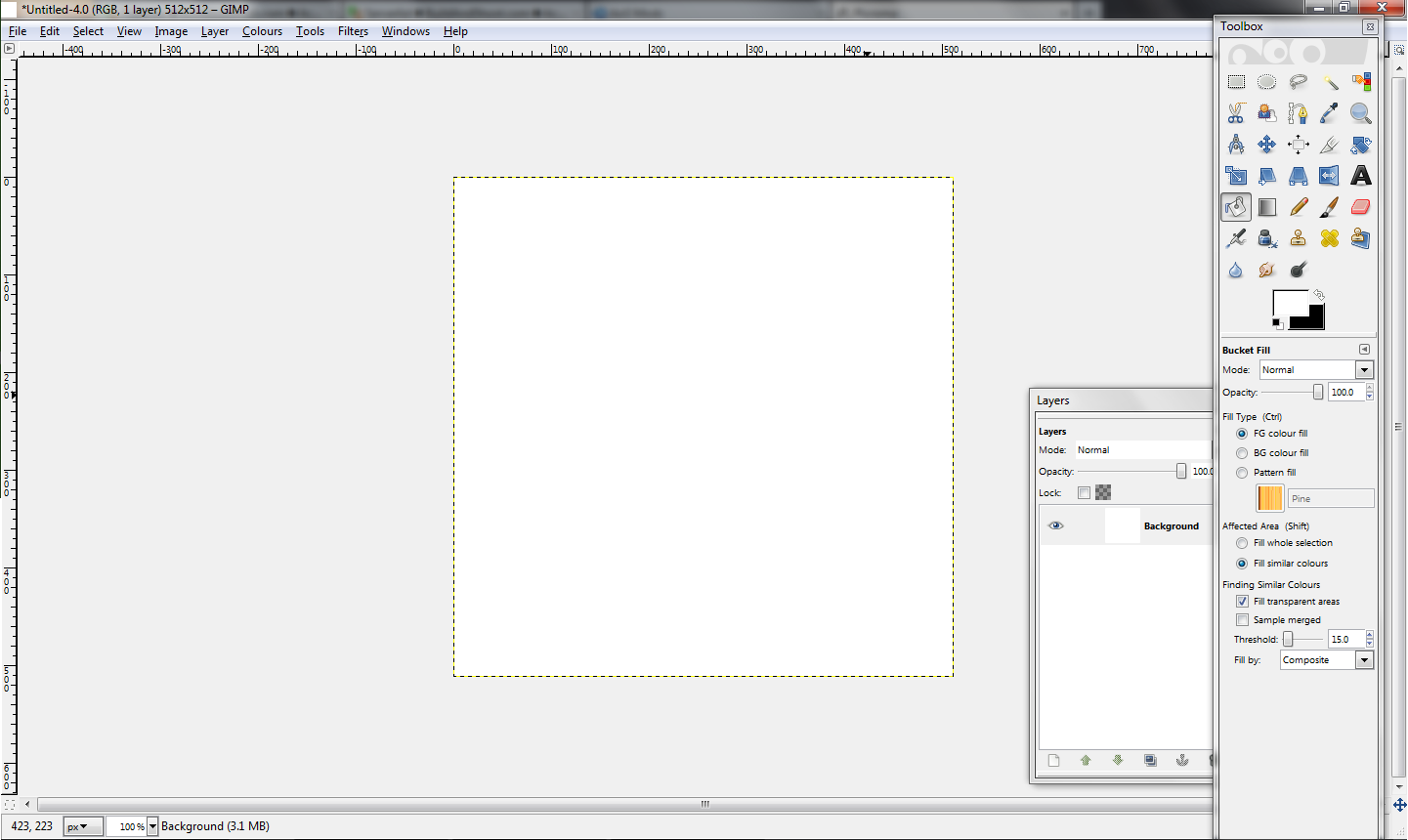 Paste the colourmap for your map into the image: 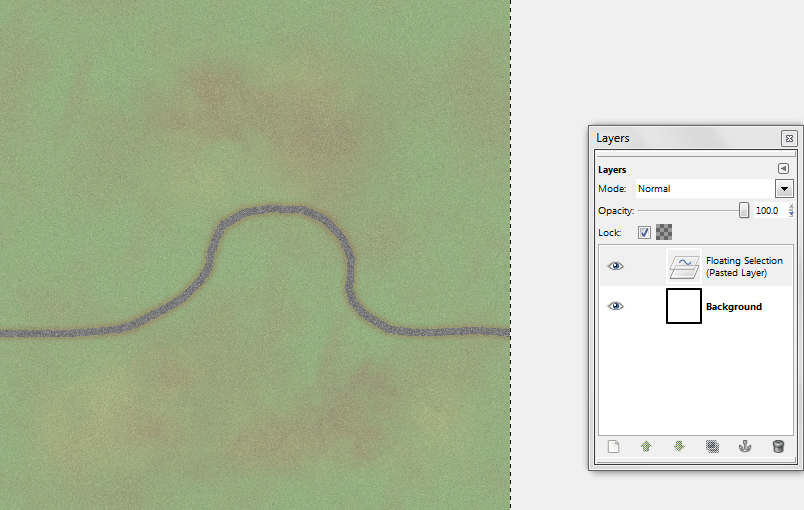 Right-click on the "Pasted Layer", and select New Layer - this puts the colourmap on its own layer and not on the Background layer. 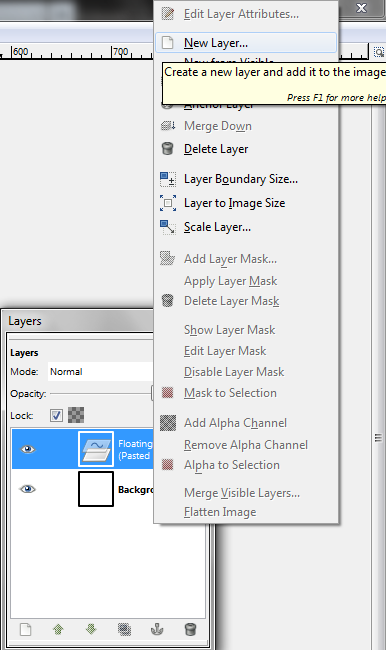 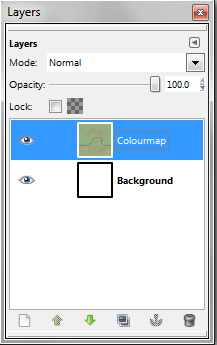 Step 2.
Delete the Background layer - you don't need it! Create a new layer underneath the colourmap layer and call it Heights: 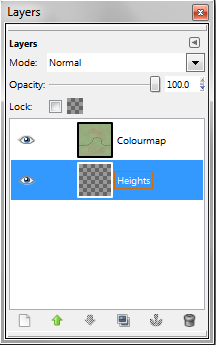 Step 3.
Set the Opacity of the colourmap to something in the middle. 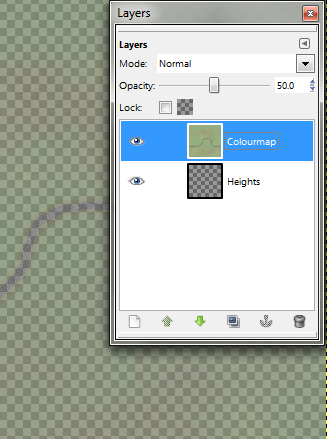 Step 4.
Start creating the heightmap. What I do is use bright, easily contrasting colours to create the entire heightmap at first, then go back over and re-colour it in the right colours.

Use unique colours for each layer - do NOT duplicate a colour.

Similar colours are allowed, but don't use the same colour for two different layers.

In the Heights layer, fill it full of a colour of your choosing. I've used a bright blue colour: 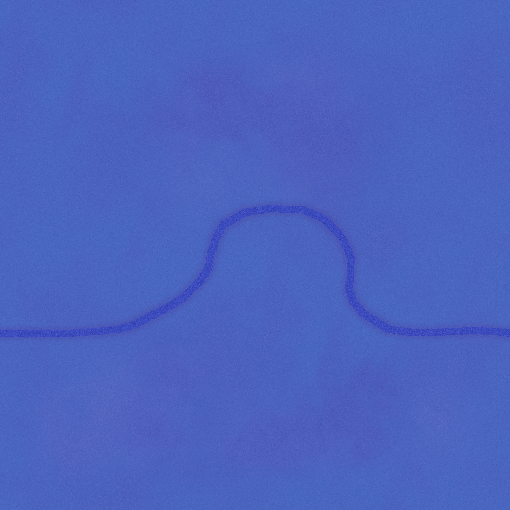 Select another bright colour that contrasts well with the first colour you picked. I've picked red. Also note that I'm using the pencil tool with the smallest brush - a 1-pixel brush. 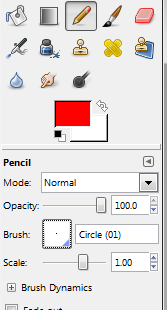 Using this, sketch a ragged line that follows the contour of the next layer up. Make sure it tiles at map edges using the technique shown in the first tutorial. 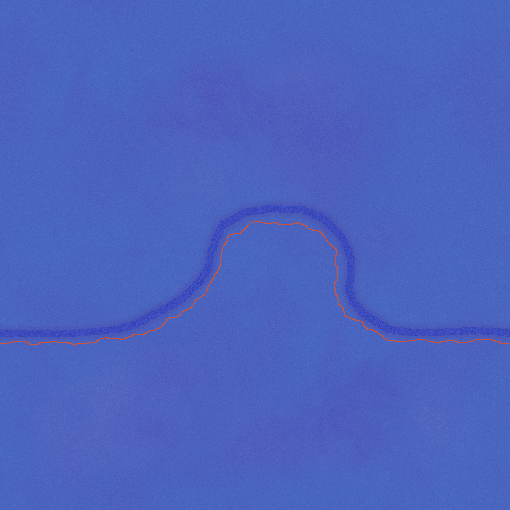 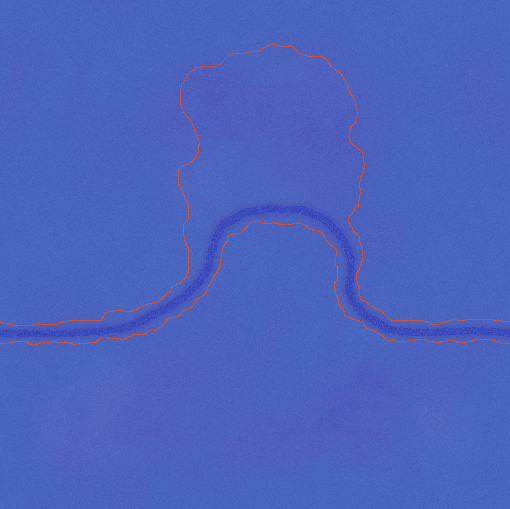 Using the fill tool, fill in the sketched shapes: 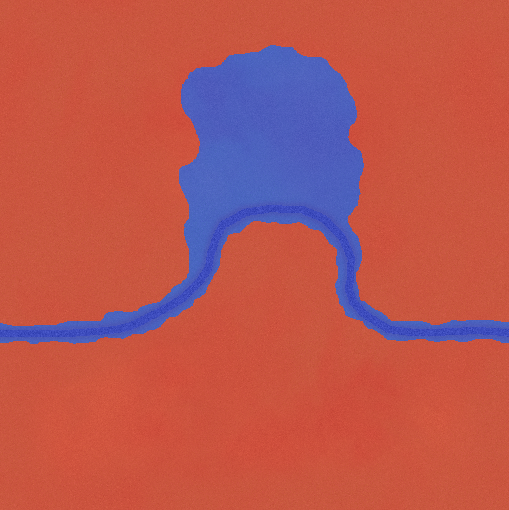 I've decided to create a small valley in the gap between the two hills. The green area will be lower than the blue area 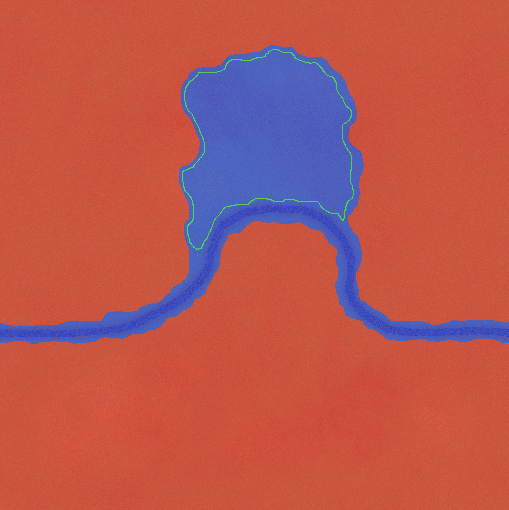 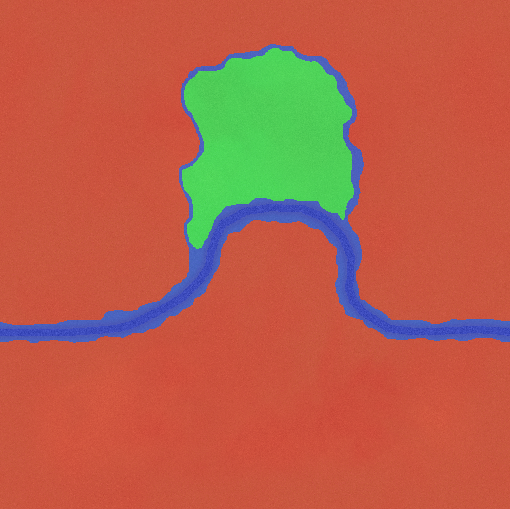 Don't be afraid of improvising. If an area looks a bit empty to you, try to think of a way to fill it. This can be by adding a hill or valley in the heightmap or by using props in the final stage of map creation. 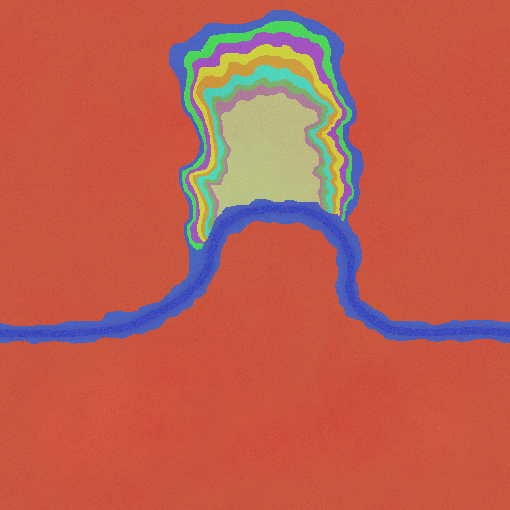 If you have got sharp eyes, you may have noticed the blue and green layers have slightly changed shape during this step. If a layer is too close to another layer (which can be either a wall or a steep slope), don't be afraid to edit it to make it work better.

The floor of the valley looks a little flat so I've added a slight rise. This will help with the gameplay because people can advance up to that point unseen by people on the other side of it. 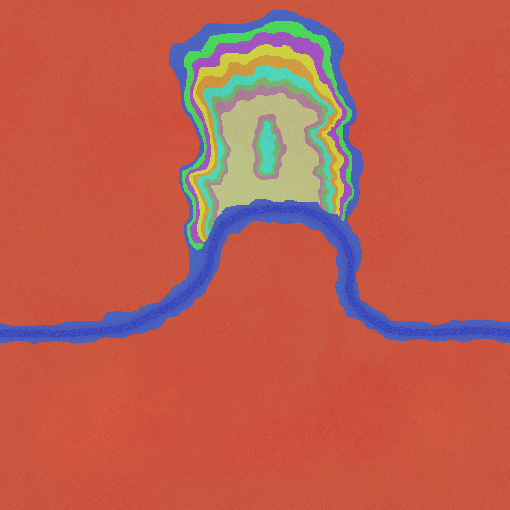 Start to draw the outlines for the hills: 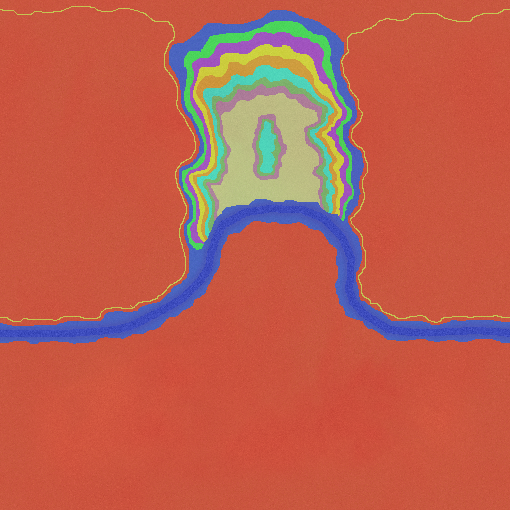 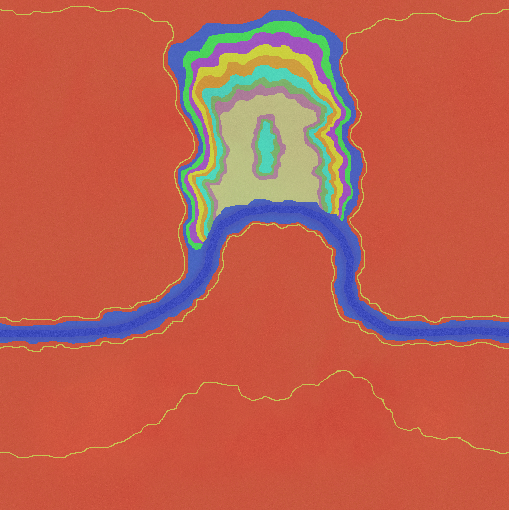 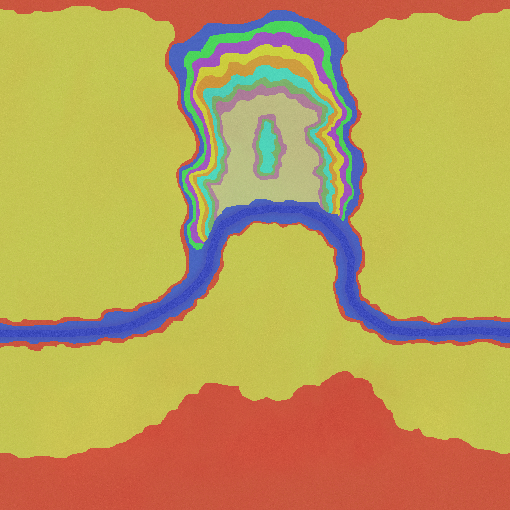 Step 5.
Keep on repeating this, drawing the outline of the next layer then filling it in. 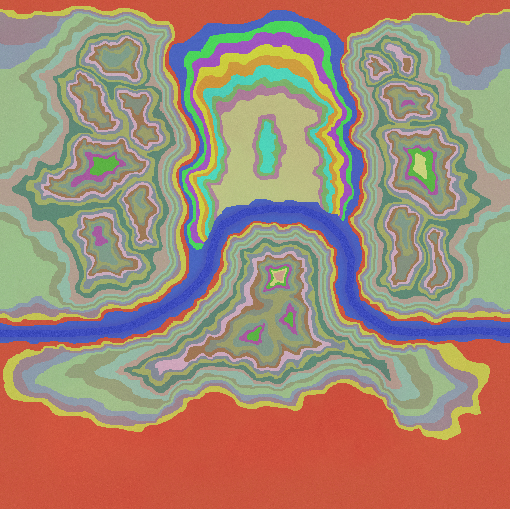 Don't look at the sudden jump in detail and think "Oh no!". It was created using the same easy steps over and over again and took time more than any kind of skill.

It's still not finished, though. The area below the middle hill looks too red - meaning it'll just be flat in the final heightmap. Let's add another valley there. 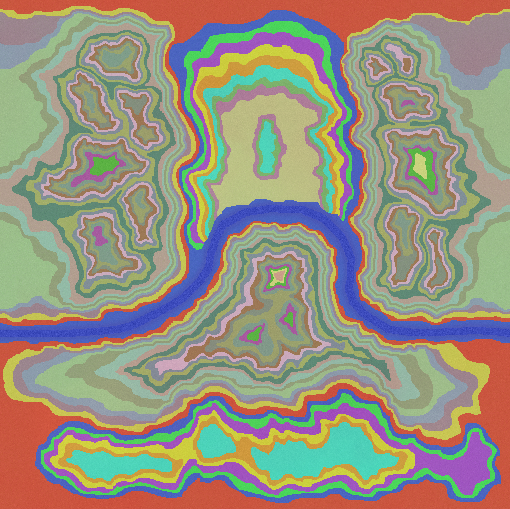 That's the heightmap created, all that's left is to colour it in. Before we start that, we'll need this image that I made and use:

Feel free to use that or another, better made one. I haven't checked if the heights in the higher end work perfectly, but I've never had a problem with it when I've used it.It also only goes up to 50 instead of 63 because I feel a map will never need to go higher than that. Plus, the closer you get to 63 blocks high, the less room there is for people to build structures at that height.

Step 6.
Right-click on the layer with the heightmap that looks like an LSD trip in it, and duplicate it. 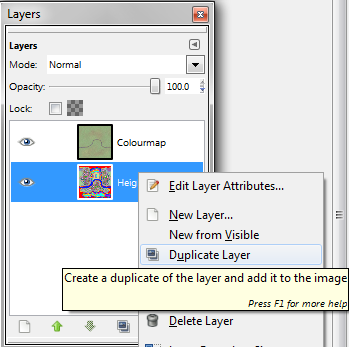 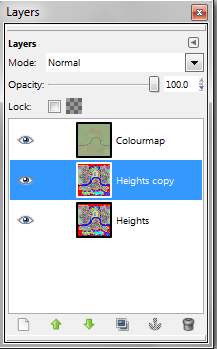 This is so, that if there are any corrections to make, I can edit the colourful one where it's easier to see what I'm doing. I'd then re-duplicate it and re-colour it again.

Using the pencil tool, if you hold CTRL and click a colour, it will change your active colour to that one. Decide which layer you want your lowest layer to be on and click the corresponding colour.

I've picked layer 3, which means that there's 2 blocks of digging space until you hit layer 1 - the unbreakable layer (and layer 0 is water).

Select the tool circled (the "Select by Colour Tool"), and with the settings circled:

Then click on the colour of your lowest layer: 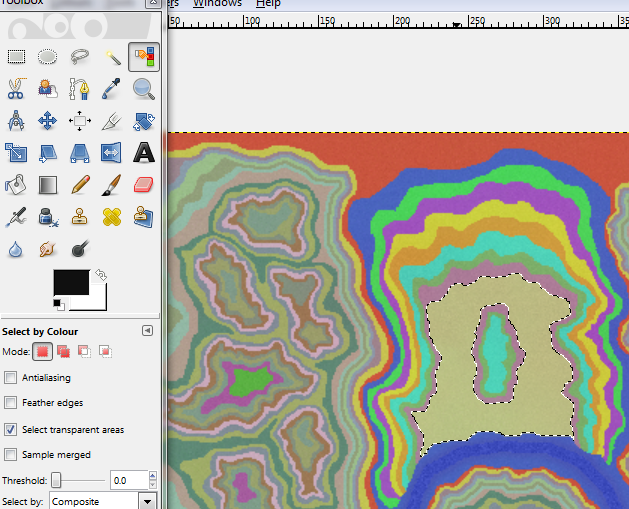 Since this is the only place this colour occurrs, and it's all joined together, we can use the fill tool: 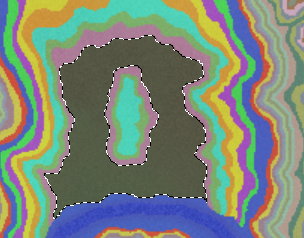 Step 8.
Click on the Select by Colour Tool again and click on the next colour to the one just filled: 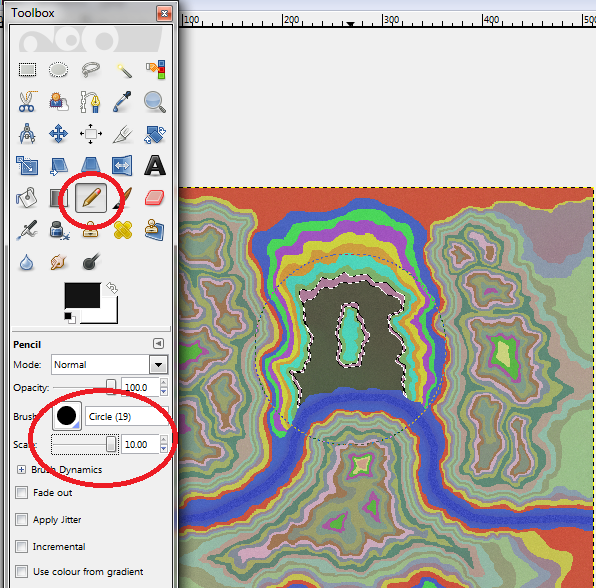 As you can see, that colour occurrs in two places, on the outer edge of the valley and the little hill inside the valley. Use the pencil tool, with the largest default brush (19 pixel-diameter circle) and set the scale to 10. This means that instead of being a 19-pixel diameter brush, it's now a 190-pixel diameter brush. Covers a whole lot more area! 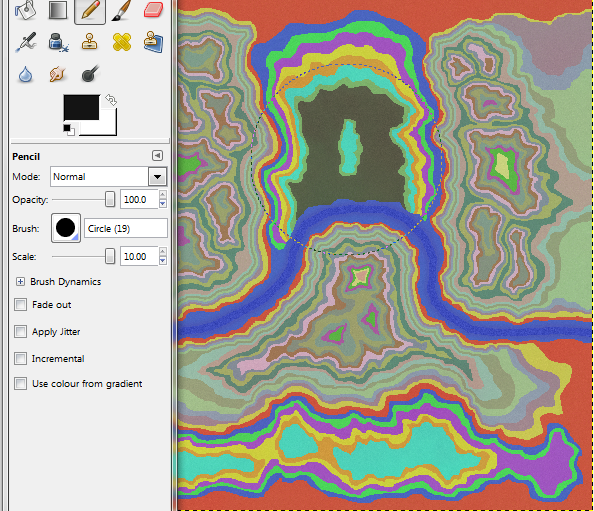 Step 9.
What I do, is as I use a colour, I mark it off somehow on my heightmap colour guide, so I know that layer is done.

Step 10.
This is the finished heightmap, ready for use in the heightmap coversion tool: 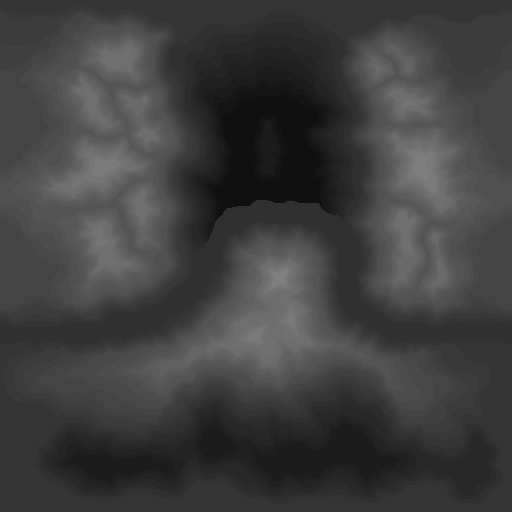 Save it as a .bmp as shown in the colourmap tutorial.

Step 11.
This is just a personal preference, but I keep the colourmap and heightmap of my maps in their own little folder. Copy the converth.exe, example.bat and the sdl.dll files from wherever you have Bildramer's conversion tools saved. 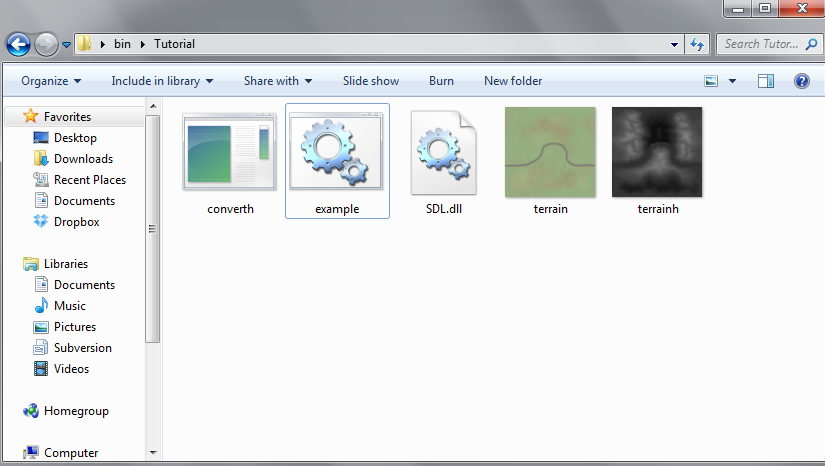 If your files were named right, it will produce a map.vxl file.

Step 14.
Feel pleased with yourself. You've just created your own heightmap! 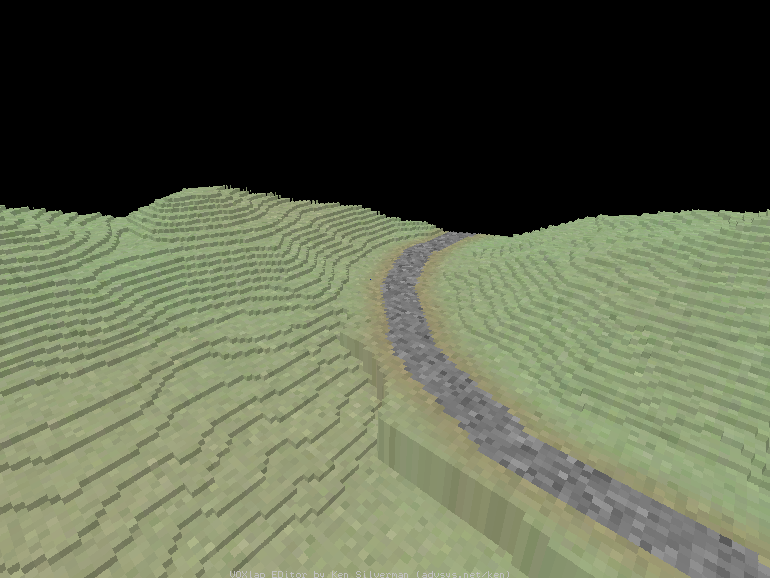 You may want to have a look through and make sure there are no errors with the heightmap, such as accidently using the wrong colour half-way through and it suddenly jumping up several blocks before carrying on as normal. If there are any errors, revert back to Step 6.

Again, if you have any questions, comments or just messages of thanks (or bags of gold to donate...), I'll be glad to receive them!
So, I sort of make maps and other stuff, like Mortars,TrueClip, and Last Stand
Top

Quote
This thread must have taken forever to make, but I'm very glad you did! Hopefully we'll get some good looking maps as a result of this.

Quote
wow great work, your tutorials should be stickied under "Maps"!
Top

Quote
The first word I thought of when I saw the finished terrain in its rainbow colours was "Trippyy".
It's a Christmas miracle!

Quote
As you can see, that colour occurrs in two places, on the outer edge of the valley and the little hill inside the valley. Use the pencil tool, with the largest default brush (19 pixel-diameter circle) and set the scale to 10. This means that instead of being a 19-pixel diameter brush, it's now a 190-pixel diameter brush. Covers a whole lot more area!
http://www.testking.net/CCIE-certification-training.htm
http://www.cca.edu/
http://www.brandeis.edu/
Top